Random Cat Will Do Anything To Live With Perfect Stranger

Erin Breean first noticed the strange cat when she and her boyfriend were walking their dog in Austin, Texas.

“It’s hot here, so we walk our dog pretty late at night — it was midnight,” Breean told The Dodo. “We’re maybe two blocks from our house, and there’s this cat sitting out at the end of a driveway. Since we walk our dog all the time, we’re pretty familiar with all the neighborhood cats, but I’d never seen this cat.” 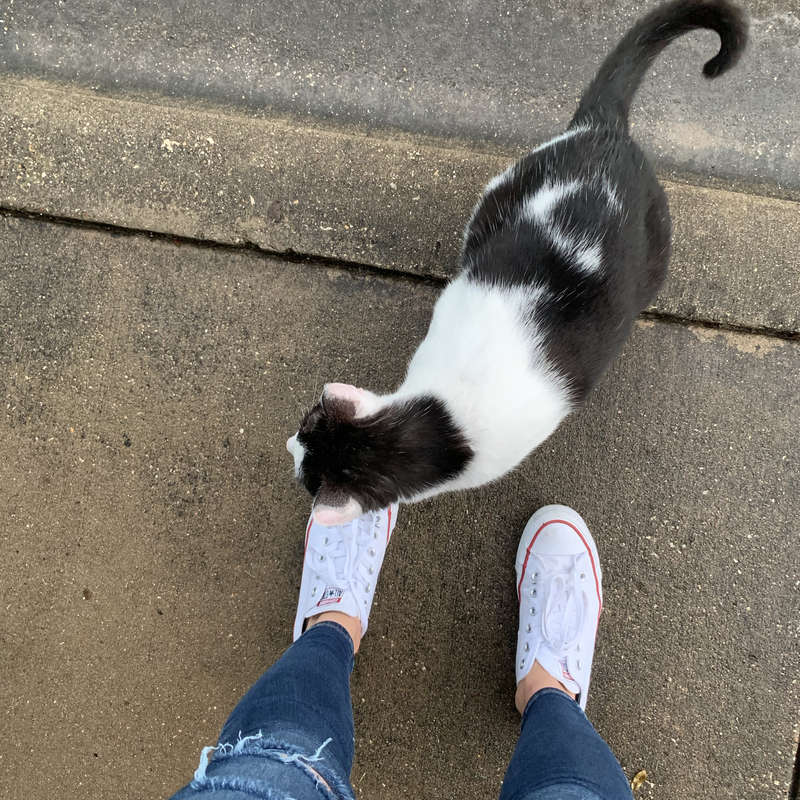 The cat seemed friendly and well-fed, so Breean figured he belonged to someone, but was maybe lost.

“He came right up to us, and he was rubbing all over our ankles,” Breean said. “But when my dog came over to see him, [the cat] tried to attack him and chase him down the street a little bit. So we separated them, and my boyfriend took our dog home.” 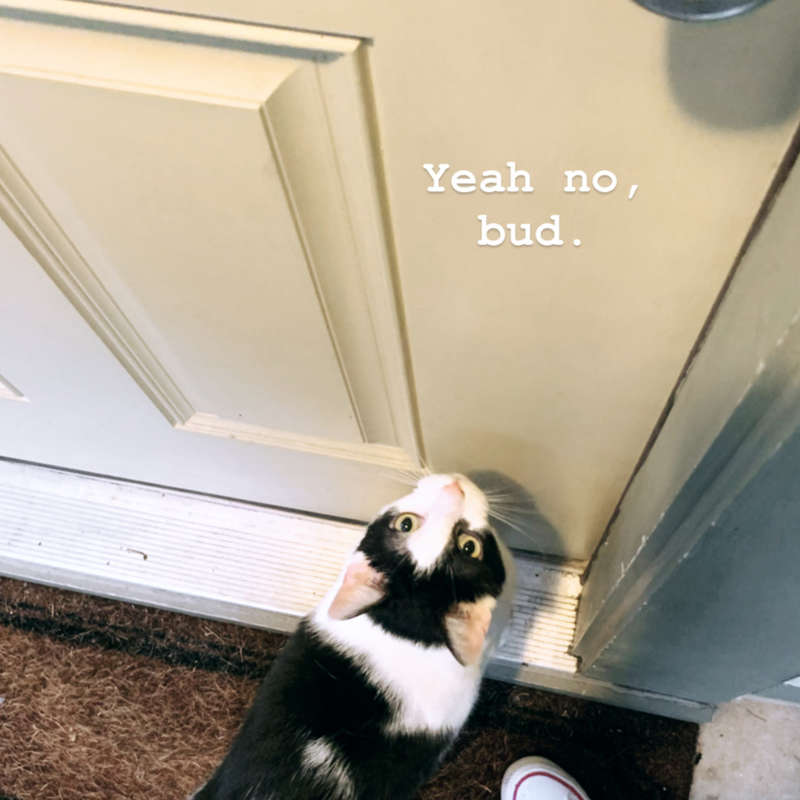 Breean stayed outside with the cat for a few minutes to take photos. She wanted to post them on the Austin Lost and Found Pets Facebook page, in case someone was looking for him.

“The cat sat with me the whole time, rubbing on me and rolling onto his belly to get belly rubs, and he was just so over-friendly,” Breean said. 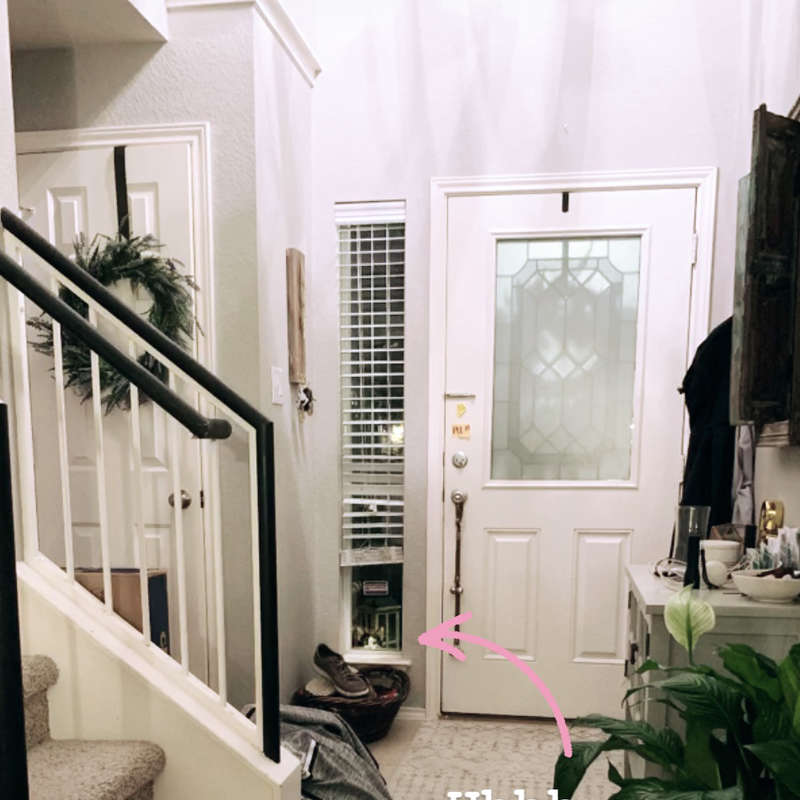 When Breean tried to go home, the cat — whom she started calling Greg — followed her.

“I was like, ‘Hey man, don’t follow me home if you live down the street or wherever your house is,’” Breean said. 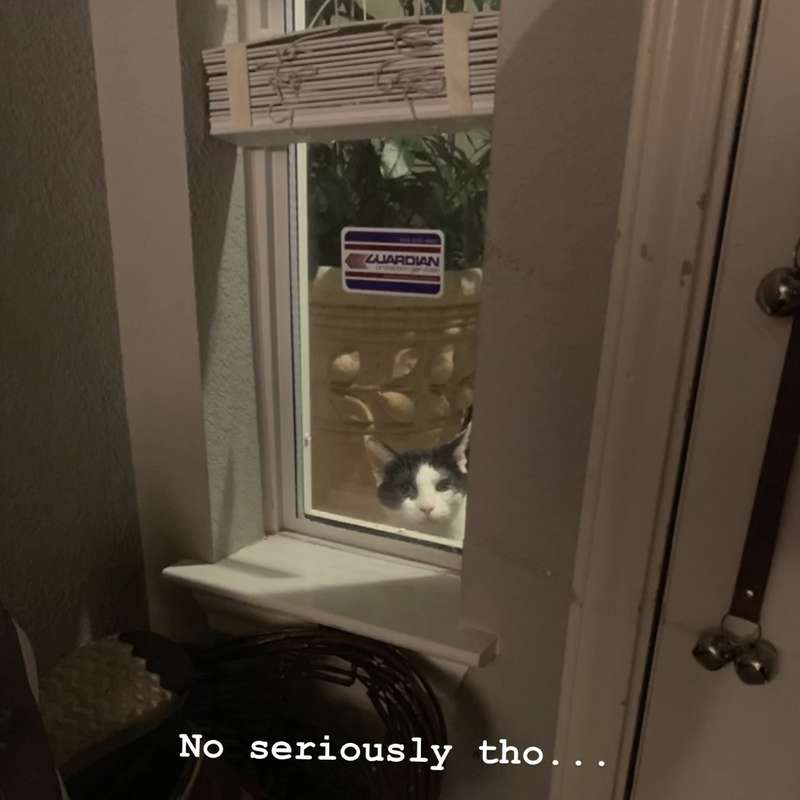 But Greg showed no signs of leaving. In fact, he planted himself at the front of Breean’s house, and stared through the window at her when she went inside. Worried he might be hungry, Breean laid out some food and water for him, and this seemed to encourage him even more.

“He sat by that narrow window for over an hour,” Breean said. “Eventually I was like, I just have to ignore him or he’s not going to go back to his house, or wherever he’s from.” 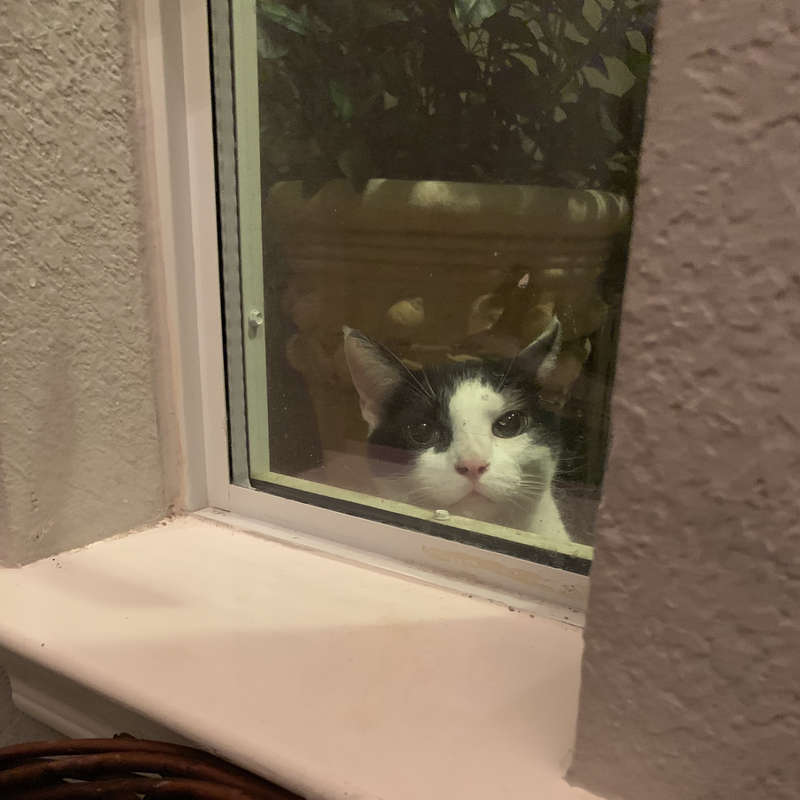 When Greg disappeared from the front window, Breean and her boyfriend thought he’d finally gone home. But they were wrong again.

“I went into the kitchen and made myself something to eat, but when I sat back on the couch, I was completely startled when I noticed someone looking in on me,” Breean said. 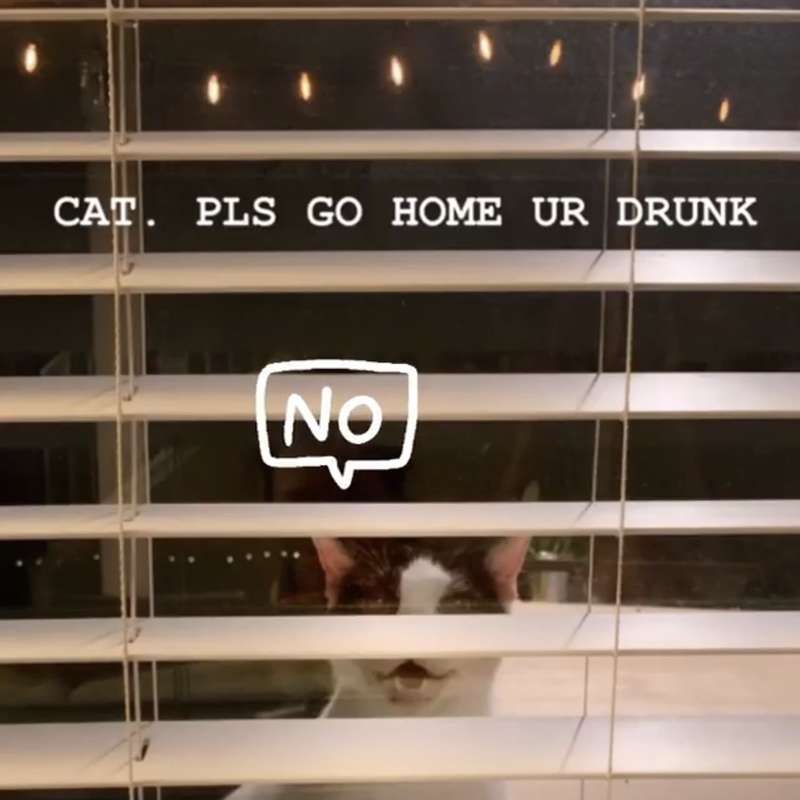 Greg was now staring at them through a window at the back of the house.

“He was just sitting out there, watching us on the couch watching TV,” Breean said. “He sat out there and yelled for nearly an hour. He tried to get in through the dog door, and then he curled up ... and went to sleep.” 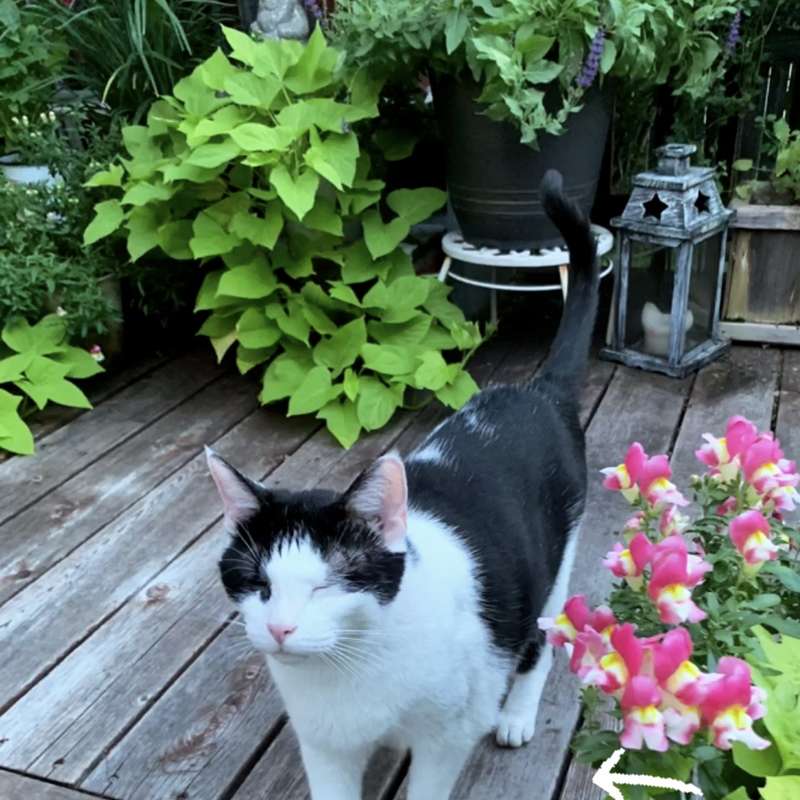 The next morning, Greg was there again — and he stayed for most of the day. He also followed Breean and her boyfriend on their nightly walk with their dog, Murphy.

“We walk our dog for about a mile, and he would come with us for the entire way, and try to chase our dog the whole time,” Breean said. 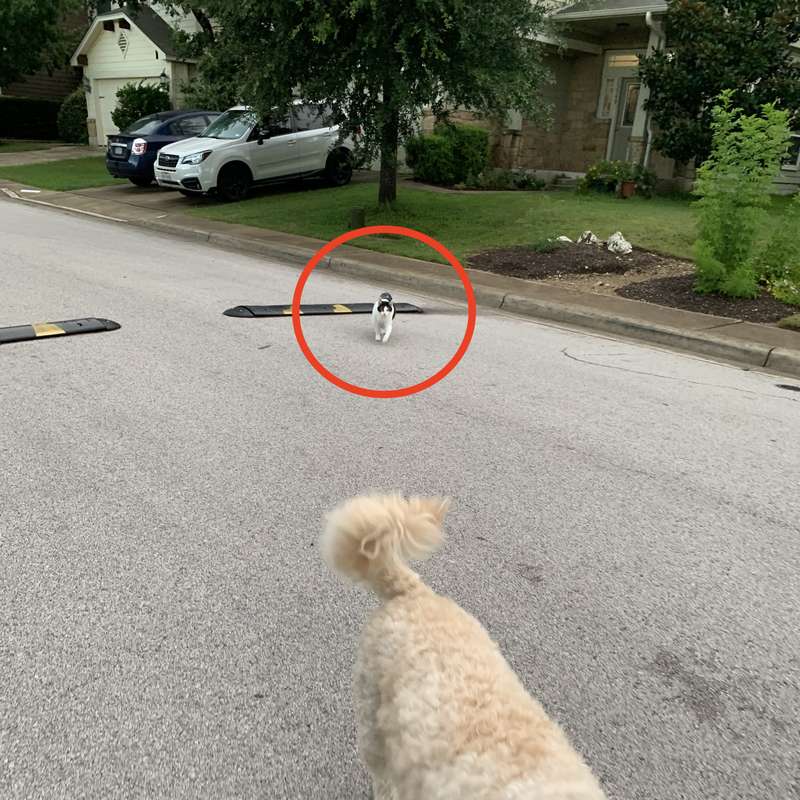 He wouldn’t let Breean out of his sight — for four days.

He continued staring through the windows the whole time. 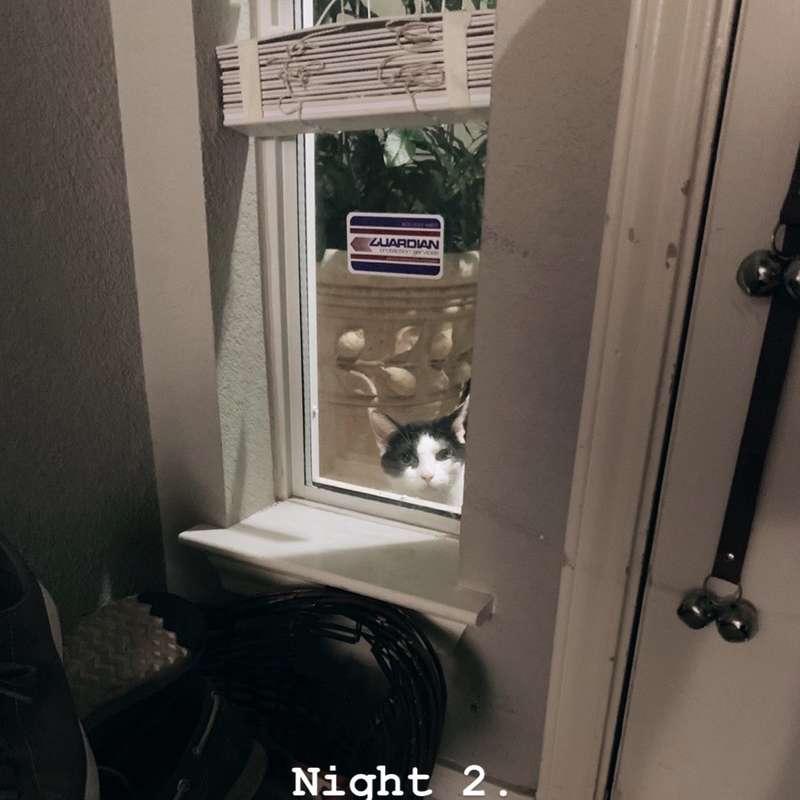 “You could come down at any time in the night … and all you’d see were these glowing eyes,” Breean said. “He would peek in through the blinds. It was completely hilarious and completely creepy ... and then after a while, we’d expect him there and look for him. He was always watching you.” 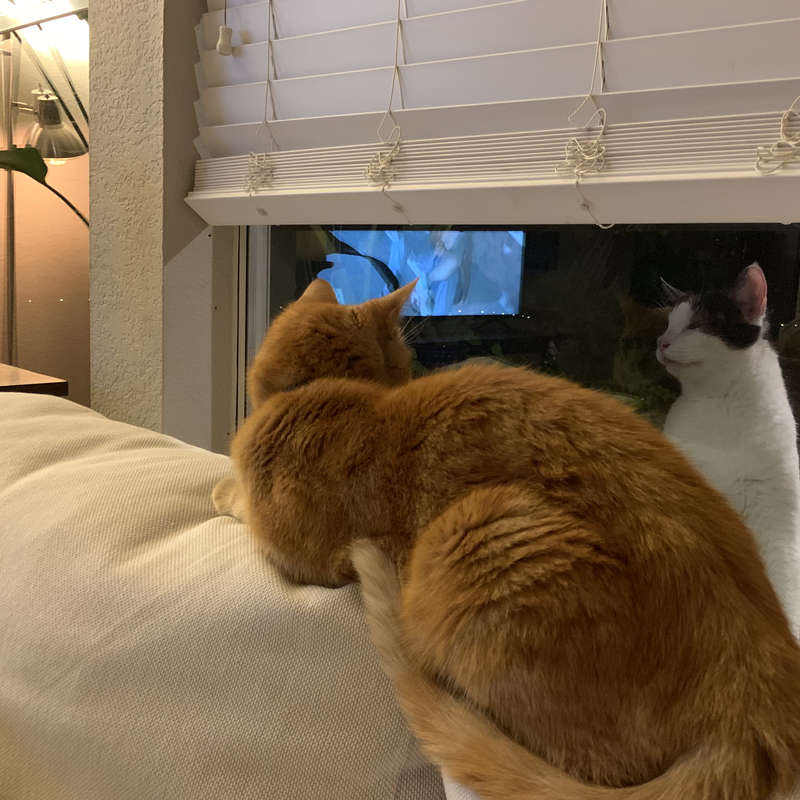 Meanwhile, Breean was trying to figure out where Greg belonged. She’d made multiple posts on social media sites about him, but no one had claimed Greg as theirs. She’d also made a paper collar for him and taped a note to it, hoping he’d go home to his owner, who’d be alerted to Greg’s wanderings, but this didn’t work either. 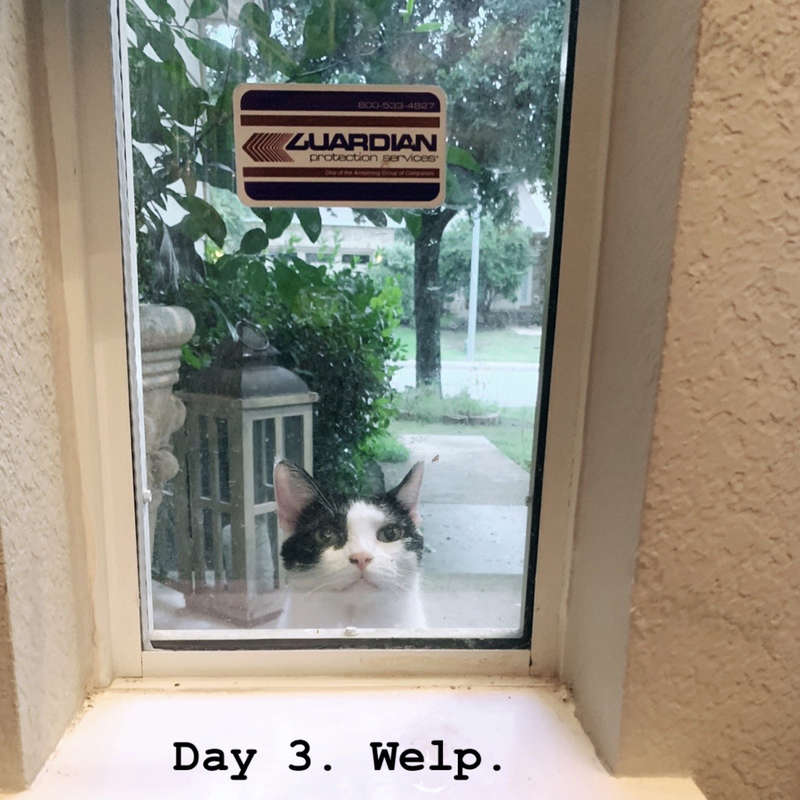 She didn’t want to take Greg to the local shelter or vet, which she imagined would be stressful for him, especially as he seemed healthy and taken care of.

“My own cat [Max] is super friendly, and he’s been known to go into our neighbors’ houses, let himself in [and] hang out with them, so I didn’t want to take him [Greg] to the humane society or the vet or anything [until I knew he needed help] … because I wouldn’t want someone taking Max somewhere,” Breean said. 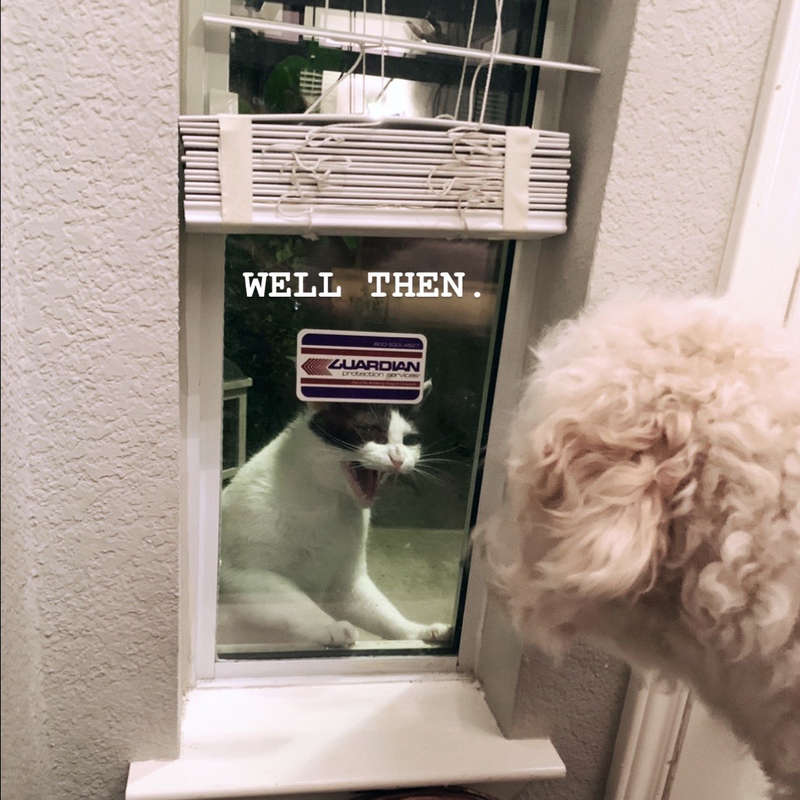 At times, she was tempted to let Greg inside, but she knew this was a bad idea since he could attack Murphy again.

Luckily, a volunteer from Austin Lost and Found Pets came by with a microchip scanner — and they managed to locate Greg’s owner with the information on his chip. 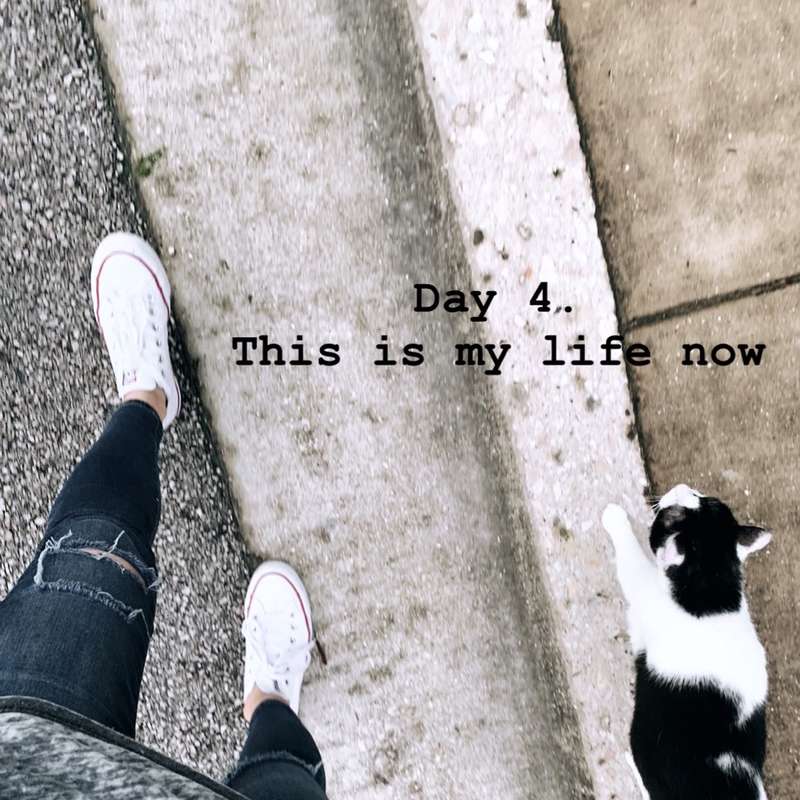 Kylo's owner, Michael Navarrete, lived in an apartment building a few blocks away, and Kylo had accidentally gotten out one night. Navarrete came to get him that same night. 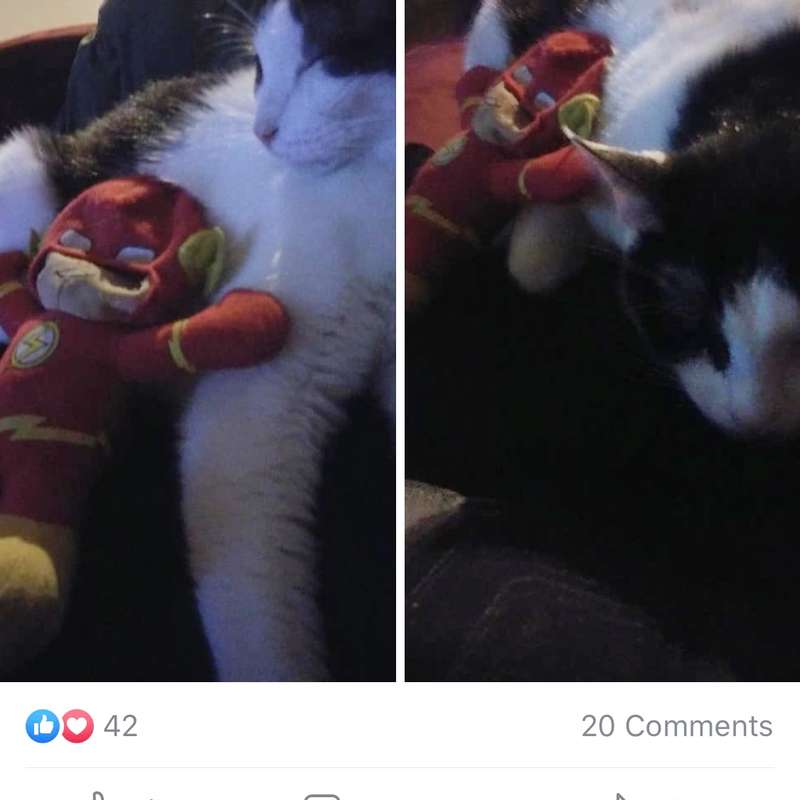 “He [Navarrete] was very happy to see him,” Breean said. “He wept for five minutes.”

Breean is happy Kylo is back at his rightful home, although she and her boyfriend miss him in a strange way. 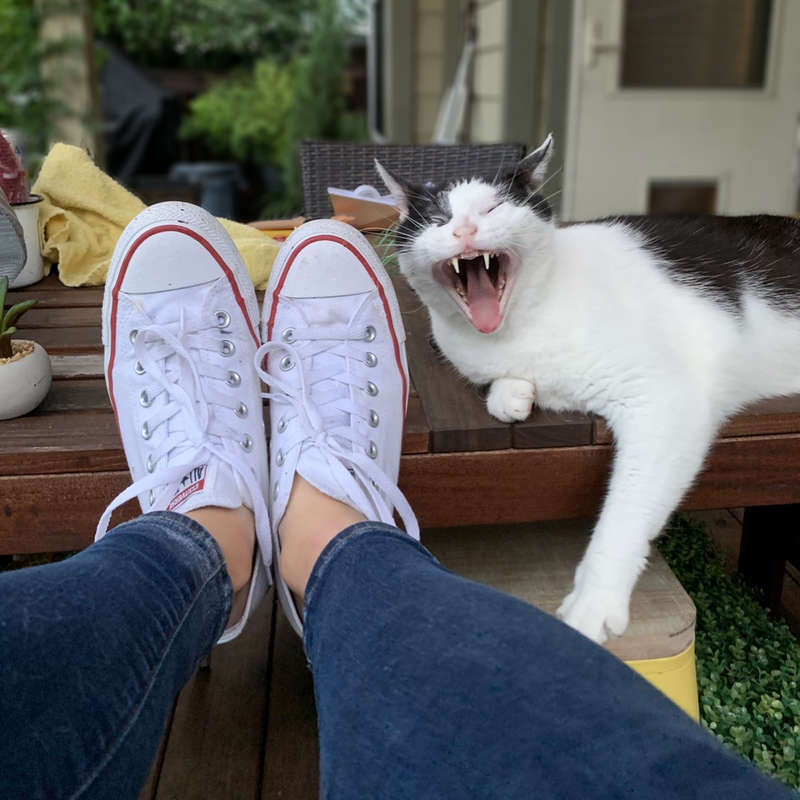 While reminiscing about the Greg days, Breean posted the story on Catspotting, a private Facebook group for cat lovers, and the post went viral.

“He was determined to get into the house, whether it was to move in with us, or call his dad or murder my dog,” Breean added. “I’m not sure which. But he was very determined.”

Check Out This Cartload of Vegan Products at WinCo Food

Facts on the Blue Heeler Dog

I Tried This Booty Workout With My Cat - and Yes, You Read That Right