Loni Gaisford was out golfing with her family last Sunday at the Mick Riley Golf Course in Murray, Utah, when she saw something unusual by the fourth hole.

Golf balls were attached in a ring to the metal fence separating the green from a neighboring house. Gaisford decided to investigate, curious why someone would make such a strange display. 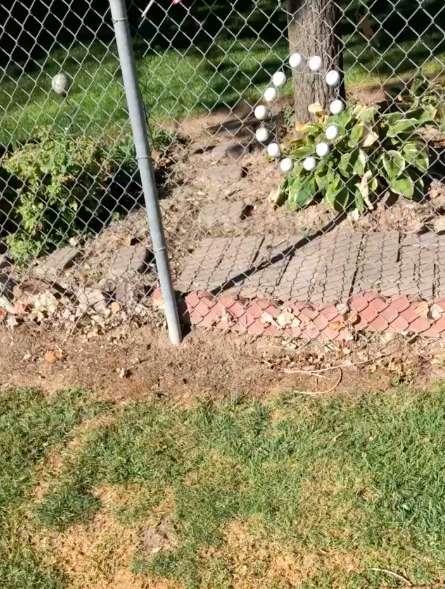 “When we pulled up to the tee box ... we noticed the golf ball ring in the fence with a sign next to it,” Gaisford told The Dodo. “I walked over to read the sign thinking it was a memorial for someone.” 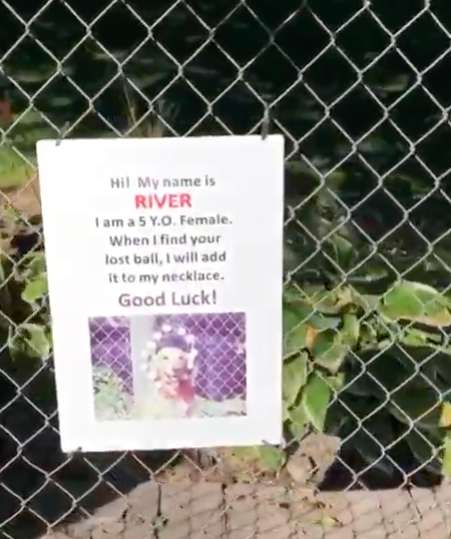 Gaisford finally understood the hilarious meaning behind the golf ball ring — and then she spotted the dog from the photo, playing nearby.

“We noticed River was in the backyard with a toy,” Gaisford said. “[She] walked over to the hole in the fence but the toy was too big to stick her head through the window so she just let us rub her back.”

After Gaisford teed off, she returned to say goodbye to River. The dog suddenly dropped the toy and stuck her head through the “necklace” to receive a few head scratches.

Gaisford posted the video to her Instagram later that night, and as the comments came in, she realized that River was something of a local celebrity. “Every time I play that course she never does that ... Jealous,” one commenter wrote.

Another commenter couldn’t resist making a few golf puns: “What’s the best type of fence for a dog who lives next to a golf course!? A fence with a hole in one!”

When the video of River made it to Reddit, more golf lovers shared stories of their own special experiences with the pup: ”One day, I was at McRiley and the owner of that dog was walking her (no leash) and she jumped right into our cart and sat down," la_fern72 wrote on Reddit. "She was super friendly.”

Gaisford couldn’t be happier that her video has reached so many people — including those who will never set foot on a golf course. “Meeting River brightened my day," Gaisford said, "and I knew the internet would love meeting River as much as I did."

Kitten Found in Gutter, Held onto His Rescuer and Wouldn’t Let Go